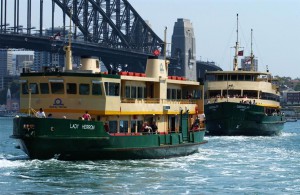 For the fourth consecutive year the Waverley Amateur Radio Society (WARS) is sponsoring this floating field day and contest which aims to bring amateurs together on Sydney’s world-famous harbour and its historic ferry service.

With WARS headquartered at Rose Bay, only metres from the harbour, it is well positioned to host this event. The contest blends the activities of a field day with a contest permitting not only the chasing of points by radio contact but also by moving along the ferry system. There will be opportunities to interact with other contest participants throughout the day.

This year is a special year for Waverley as it celebrates its centenary. During the contest there will be an opportunity to work the Club station with its special event callsign (VI2BV100). Each contact with this station, for a maximum of 5 contacts, will allow up to 100 Centenary points to be added to the final score.

The object of the contest is to make as many contacts as possible from the ferries or from any of the system’s wharves. Operation is restricted to VHF and UHF bands using hand held transceivers. Any mode is permissible and contact may be simplex or through a repeater.

The scoring system encourages operators to visit as many wharves and travel on as many ferries as possible in a six-hour period. See the Contest Rules page.

As points will be claimed by location rather than by distance and with no advantage for high power or digital modes, all classes of licensees including Foundation, can compete equally.

There are a number of awards for achieving goals such as Worked All Ferries, as well as for the highest number of contacts made.

Home and mobile operators can also take part by contacting amateurs riding the ferries or by activating wharves.

With this fourth edition of the contest, it is hoped that the event will continue to be a regular part of the amateur radio calendar.

For a maximum Sunday fare of $2.70 (less for seniors!) using the NSW Transport Opal card, you can enjoy a full day of fun and radio in our fabulous harbour city!