The first ferry service was established in Sydney in 1789 from Farm Cove to the farming settlement of Parramatta. The first vessel officially named the Rose hill Packet, although commonly known as the “Lump”, was powered by sails and oars with a convict crew. Trips typically took up to one week to complete. Other services in the form of a series of rowboat ferrymen were set up in order to transport people across Sydney Harbour.

In March 1859 the Sydney Morning Herald advertised a public meeting with the intention of forming a commercial ferry company to run services on Sydney Harbour, however, the potential shareholders did not match the enthusiasm of those who formed the idea and the concept was deferred until in 1861 the first commercial service, The North Shore Ferry Company, was established. This was followed in 1899 by Sydney Ferries Limited which became the world’s largest ferry operator as measured by fleet size. The opening of the Sydney Harbour Bridge in March 1932 led to a rapid fall in ferry patronage from 30 to 13 million passenger trips per year. Financial difficulties led to intervention by the NSW government which then operated the ferry service under a number of different organisations including the Public Transport Commission (1972-1980), the Urban Transit Authority (1980-1989), the State Transit Authority (1989-2004) and the Sydney Ferries Corporation (2004-2012). From July 2012, in response to a government enquiry, the provision of services has been contracted out to Harbour City Ferries whilst the government retains ownership of the fleet. 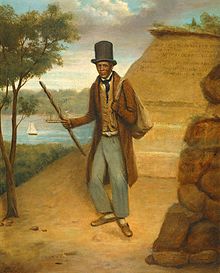 William “Billy” Blue was sentenced to transportation to Botany Bay at a court in Kent in 1796 after he was found guilty of stealing 20 pounds of raw sugar most likely to support his trade as a confectionery maker. His origins are unclear with his birthplace and ethnic background being uncertain with reports suggesting he came to England from the United States having being born in Jamaica somewhere around 1767.

Billy Blue reached Sydney on 14th December, 1801 aboard the convict ship Minorca having less than 2 years of his sentence to serve. Over the next few years he worked as a waterman collecting and selling oysters amongst other items and due to his whimsical style and banter found favour with both the general public as well as government officials. Governor Macquarie appointed him as harbour watchman in 1811 which enabled the acquisition of a new home overlooking the harbour which became a local landmark and a grant of land which is now Blues Point.

As a landowner on the north side of the harbour he quickly built up a ferry fleet, operating chiefly between Blues point and Dawes point, with his activity leading to Governor Macquarie light-heartedly naming him “Commodore” which eventually led to him being known as “The Old Commodore”. This was a title which was further reinforced by his appearance where he donned a semblance of a naval uniform and a top hat.

Billy Blue had several brushes with the law over the years which mostly centred round accusations of smuggling and harbouring escaped convicts. The consequences of this was the loss of his position as a harbour watchman as well as a period in jail. He died on 7th May 1834 at his North Sydney home leaving a legacy as a character and a battler.

All operators who submit a log will receive a Billy Blue Award certificate.

Join the CW Special Interest Group online on Thursdays. Group meets via zoom and practices with various tools on air and online. Meeting details are available from the club mailouts.
View Calendar
Add